TLDR; This article will get you up to speed with everything you need to know about the Facebook Ad Relevance Score. I’ll also be covering six quick tips to help you optimise the Relevance Scores of your Facebook Campaigns, Ad Sets and Ads.


Facebook first introduced its Facebook Ad Relevance Score metric in February of 2015. This feature was introduced to help advertisers gain a more accurate understanding of how relevant their Facebook Ads are to the audiences which they target.

What is Relevance Score? And Why Does it Matter?

The Facebook Ad Relevance Score is a measurement of the relevancy of an individual Facebook Ad to its intended target audience. This metric assists advertisers by ensuring people see ads which matter to them. Fundamentally, this leads to a better user experience for both people who use Facebook (and it’s related platforms) as well the businesses who advertise on Facebook.

Every Facebook Ad is scored from 1 to 10 – with 10 being the highest and thus, the most relevant ad for the targeted audience as defined by the Ad Set targeting.

Metrics that are very likely to effect the Relevance Score include:

Perhaps most importantly is the effect that Facebook Ad Relevance Score’s have on average CPC and CTR. If Facebook deems your ad irrelevant to the user, the average cost of your ads will increase whilst simultaneously being distributed to a smaller number of your target audience’s News Feeds.

Whilst Relevance Score isn’t the ultimate metric that determines whether or not your ads are successful, it is important to pay attention to – especially if you’re trying to optimise the return of investment your ads generate. Optimising the Relevance Score of your ads will result in your ads being seen by more people in your target audience, at a lower cost – ceteris paribus.

How Can I Improve My Facebook Ad Relevance Score?

It’s all about specificity.

Additionally, if you’re targeting your audience correctly in terms of demographics and sociographics, it’s more likely they will engage with your content because your ads will – by definition – be more relevant to their interests.

Now that we’ve covered the theory surrounding Facebook’s Relevance Score, here are six quick tips to help you improve the Relevance Score of your ads.

Dwindle down your targeting to people who have intersecting interests in the product, service or content you’re advertising. To do this, you’ll first need to have an understanding of who your target audience is – e.g. age, gender, location, interests etc.

Let’s use my band, One True North, to demonstrate how this works.

One True North is a pop punk / alternative rock band which draws influences from bands like blink-182, Simple Plan and Taking Back Sunday. The music isn’t gender specific nor is it location specific.

Great, now we have some data points we can use to guide our Audience Research. It’s now time to fire up Facebook’s Audience Insights tool to dive deeper on this data.

Once you’re Facebook’s Insights tool, “Everyone on inside Audience select Facebook”. 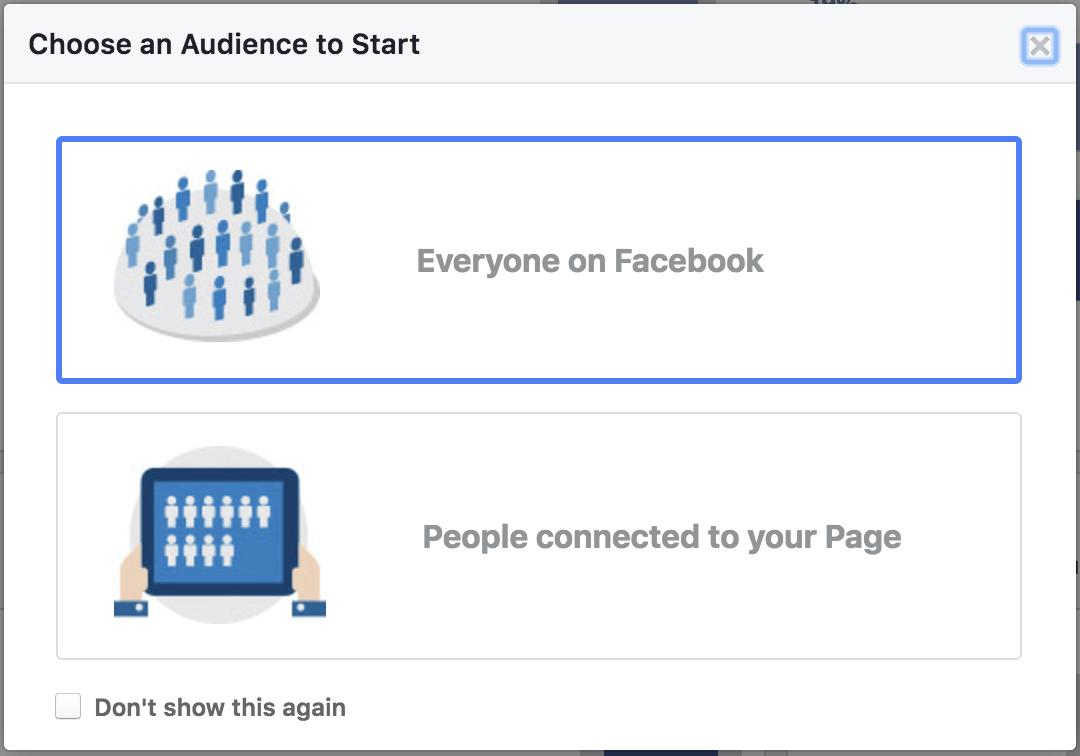 You can now begin your Audience Research using your existing understanding of your target audience. Using my band as the example, I chose the following demographic metrics to begin with: 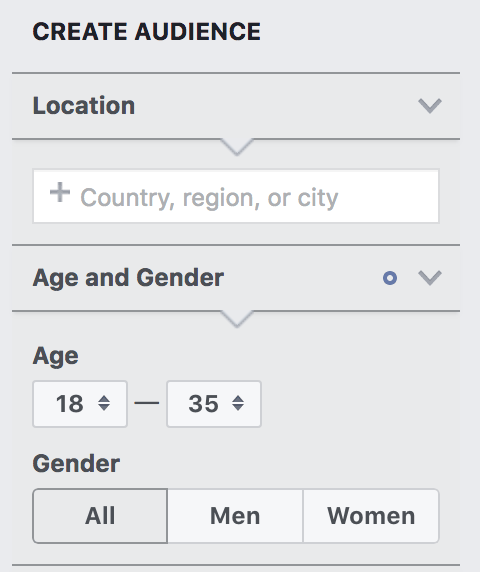 Now that we have our basic demographics selected, it’s time to start defining our audience using interests. As stated above, my band draws influences from bands like blink-182, Simple Plan & Taking Back Sunday. So let’s continue by adding those bands into the Interests Section of the Audience Insights. 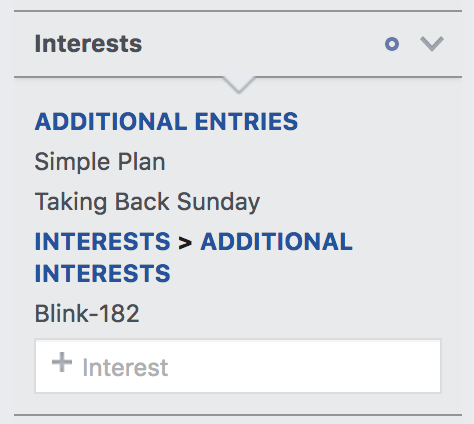 Now that we have some basic interest target selected, it’s time to see what other bands (interests) people in our target market have an affinity for. To do this, navigate to the “Page Likes” Tab (next to Demographics) at the top of the page. 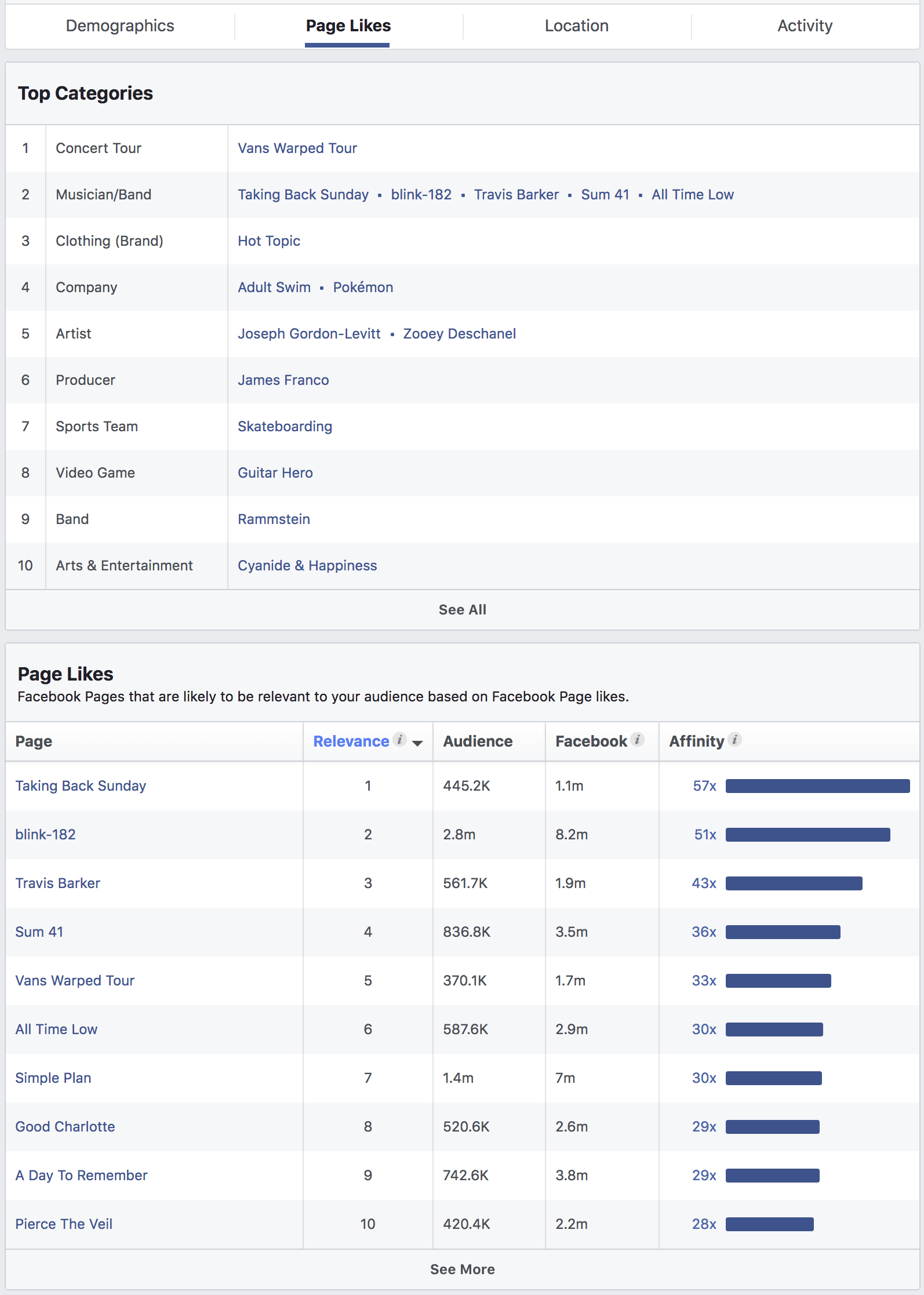 Facebook will now you show a list of Pages that people in our current target market have a high affinity for. Now all you need to do is go through this list and add the mot relevant pages (i.e. those bags with the highest affinity that also match your target market criteria) to your Interest Targeting. This will result in a defined target audience you can use inside your Ad Sets.

Once you’re happy with the audience you’ve created, click “Save” and name your audience so you can access it later in your Ad Sets’ targeting.

Now that we have a defined audience, it’s time to create content which will resonate with that audience to achieve our overarching goal.

To keep things simple, we’ll use my band to demonstrate how this works.

So what is the overarching goal my band want’s to achieve by running Facebook Ads?

Like most bands, our overarching goal is to have our music discovered by people in our target audience. Our secondary goal is to turn have those people who discover and enjoy our music to add it their Spotify or Apple Music libraries.

With those goals in mind, we created a lyric video for our first single to use as the main content for the ads we were creating. In our mind, creating a lyric video was the most cost and time efficient way of creating engaging content which was most likely to resonate with our target audience. Furthermore, now that we know what kind of content we would be promoting, we are able to make an informed decision about the most suitable Facebook Campaign we could use to achieve our overarching goal – i.e. Video Views Campaign.

With our Campaign and Ad Set targeting defined, we then created our first iteration of an ad (featuring the lyric video as content) to achieve the overarching goal. Here’s what it looked like: 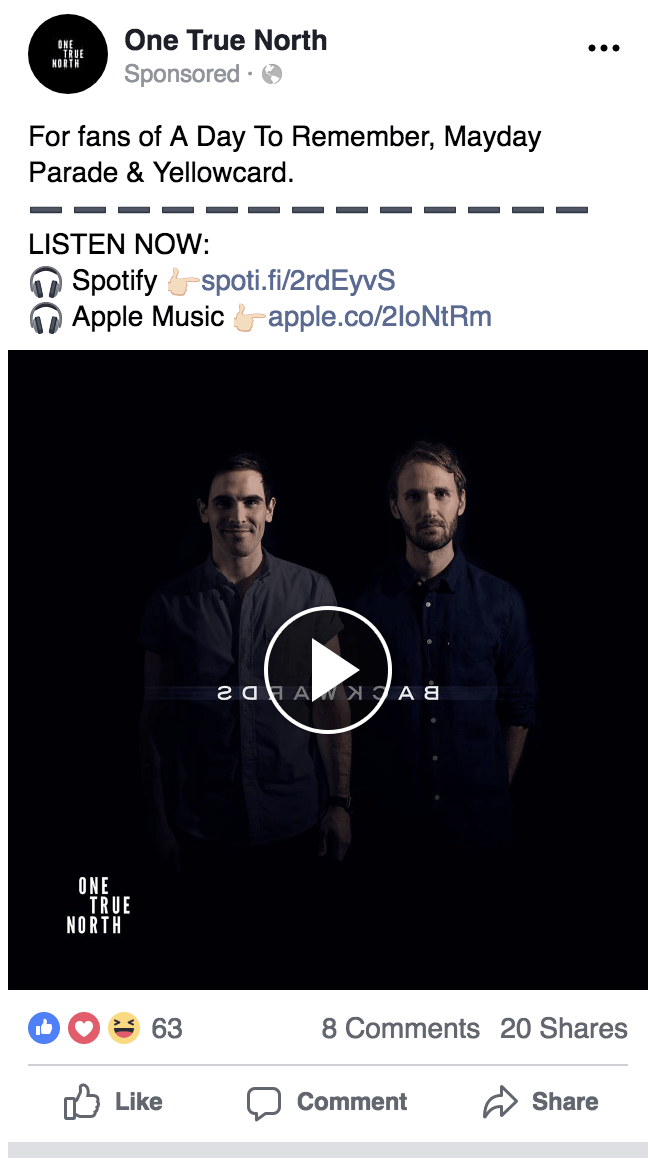 A few things to note about the construction of this ad:

I’ve been running Facebook Ads for a VERY long time now (since before Facebook’s IPO) and in that time I’ve managed well over $1,000,000 of media spend for clients across a plethora of industries. Naturally, with so many years of experience, I’ve learnt A LOT about what works and what doesn’t work when it comes to Facebook Ads. I’ve also learnt a number of killer hacks, or secrets, when it comes to running a successful Facebook Ad campaign…

Funnily enough, the BIGGEST secret I’ve discovered about Facebook Ads over the years has very little to do with the technical side of things, and everything to do with the psychology behind how you’re actually building the ads.

By far, the BIGGEST secret that I’ve learnt about running Facebook Ads is that what YOU think is going to absolutely crush and dominate is most likely going to bomb and fail, HARD.

Just because you think the Facebook Ad you’ve created is going to excel, doesn’t mean it will. And that’s NOT a bad thing, it’s actually a GOOD thing.

Well, at the end of the day, data is king when it comes to running Facebook Ads. Anyone that’s run a Facebook Ad Campaign before will know full well just HOW much data there is to play with and optimise.

As an advertiser, it’s YOUR responsibility to use this data to refine and optimise your targeting and ad creative to best achieve your overacting goal at the lowest cost possible. Doing so will naturally lead to increases in your Facebook Ad Relevance Score.

With that said, one of the best ways to test what works and what doesn’t work is to split test both your Ad Set targeting as well as the creative inside of your Ad Sets.

This is easy thanks to the “Duplicate” function inside of Facebook’s Ad Manager.

Let’s again use my band’s Video Views Campaign to demonstrate how to create a basic A/B split test at the Ad level first, and then at the Ad Set level. 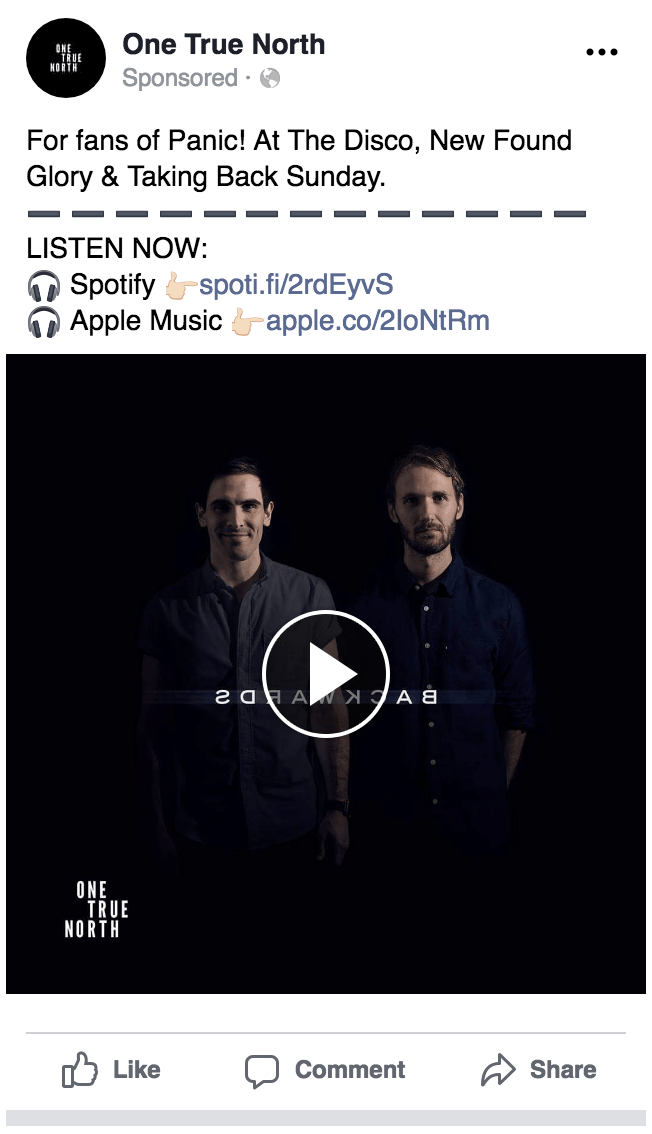 Now simply change an element of the duplicated ad that you want to test.

For this as, I want to test the effect of the ad’s copy (I.e. “For Fans of…”) by swapping out the band names which my audience are fans of.

Now that I’ve got a basic A/B split test running at the ad level, I can now split test my Ad Set. You can split test whatever you want inside your Ad Set but to keep things simple, I’m simply going to split test the effect of running my ads on Facebook Mobile VS running my ads of Facebook Desktop (i.e. split testing the ad placements). 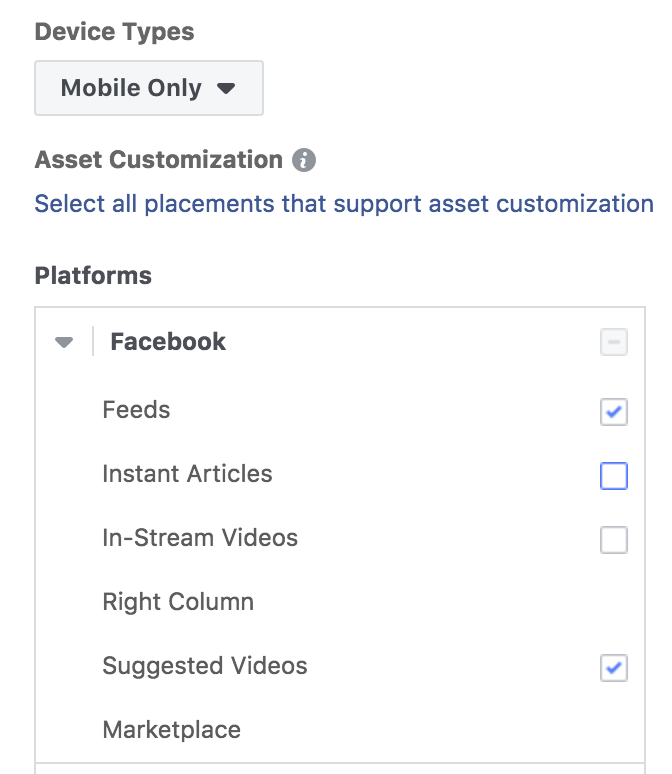 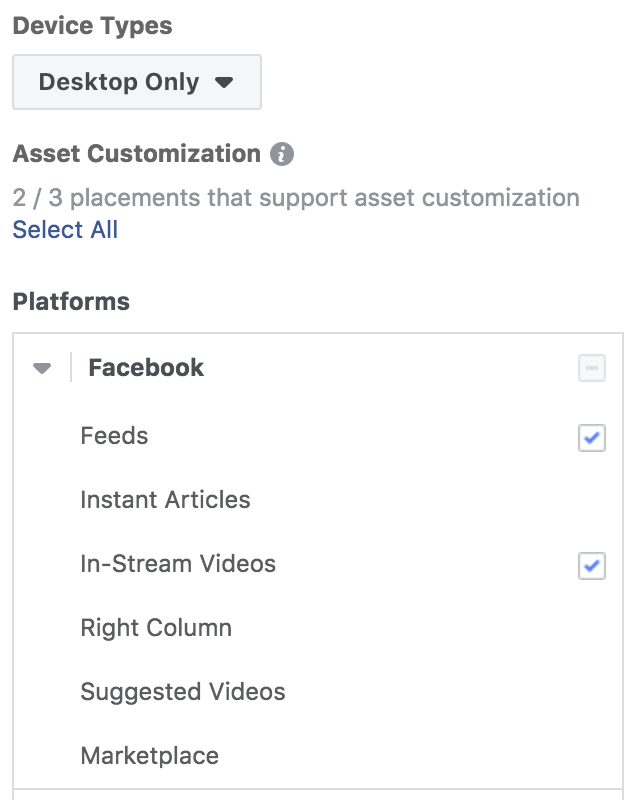 Now all you have to do is name your Ad Sets accordingly, set a daily budget (I usually run Ad Sets at a $5 daily budget for a few days until I’ve got enough data and insights to play with), hit publish and you’re done.

Once you’ve gathered enough data during the testing phase of your campaign, you can then optimise the ad split tests for the best performing ads, variable to your overarching goal.

This additional testing period will allow you to gather more data so that you can accurately optimise for the best performing Ad Set.*

* Please note, in the event one Ad Set is severely underperforming relative to another Ad Set, it’s worth pausing the underperforming Ad Set at this stage rather than wasting additional budget on another round of testing. For example, if my Desktop Ad Set was costing me significantly more per video view and generating a lower total number of video views relative to my Ad Set targeting mobile after the first testing phase, I would pause the Desktop Ad Set immediately rather than wasting more budget on additional testing.

After you’ve completed another test run of your Ad Sets which each contain the optimised Ad, you can now optimise for the best performing Ad Set.

It’s important to note that Relevance Score only applies at the Ad level, therefore when optimising for the best performing Ad Sets, you will need to optimise for the Ad Set which delivers the most results at the lowest cost. This will be dictated by the overarching goal of your Campaign.

Using the example of my band above, I optimised for the Ad Set which resulted in the largest number of 10-Second Video views, at the lowest cost per 10 second video view (I did this by pausing the underperforming Ad Set and leaving the best performing Ad Set active).

I chose to optimise my Ad Sets in this way because I created a Video Views Campaign to achieve my overarching goal (have my bands music discovered by people in our target audience).

What has you experience with Facebook Ad Relevance Score been?

Do you know any other tips or tricks you use to optimise your Facebook Ad Relevance Score?

Let me know by commenting below.

Thank you for reading! If you found this article helpful, please consider sharing it.